Light and text in images

As part of my residency at Guildford Cathedral, I have been experimenting with using text within photographs.  The theme is the metaphor of light, with quotations from biblical and other scriptures.  This has taken its cue from the conception of the Cathedral building itself as a temple of light.

As the work has progressed, I have aimed to make the text elements of the compositions appear integral to the images themselves, to the point where it's not easy to judge whether they were there in the original locations.

Here, I used the south and north pulpits as the locations.  Both had tapestries for the Christmas season (the photos being taken on the day of the Epiphany service).

On the south pulpit, the tapestry contained an image of an open book.  It was, therefore, a simple choice to insert text within it.  The process involved creating a text layer in Photoshop, with a suitable font, and colour matching it to the darker part of the book image.  A slight outer glow was used from the Effects (fx) menu, to give separation from parts of the existing page.  The text was then skewed and warped in the Edit menu, to follow the contours of the page and so appear to be written on it.

A different approach was taken on the north pulpit.  The tapestry contained an image of the Cross with a rather solar glow, which would have made any additional text appear incongruous with the composition.  But, on the stone wall behind the pulpit, was a carved and coloured inscription commemorating the consecration of the Cathedral.  A text was chosen, and put into a text layer, using a font and colour to match the existing as closely as possible.  This was scaled and slightly skewed in the Edit menu, to align it with the perspective of the wall joints.  As the wall was out of focus, the text was also blurred a little in the Filter menu.  The carved incisions were also matched by subjecting the text layer to 'bevel and emboss' in the Effects menu. Finally, the layer's opacity was reduced a little to allow some texture of the stone to come through.

A refinement, for showing the two images together, was to crop both to be, as nearly as possible, identical in proportion and geometry.  The slide show below shows the process of adding the layers, and the details of the texts. 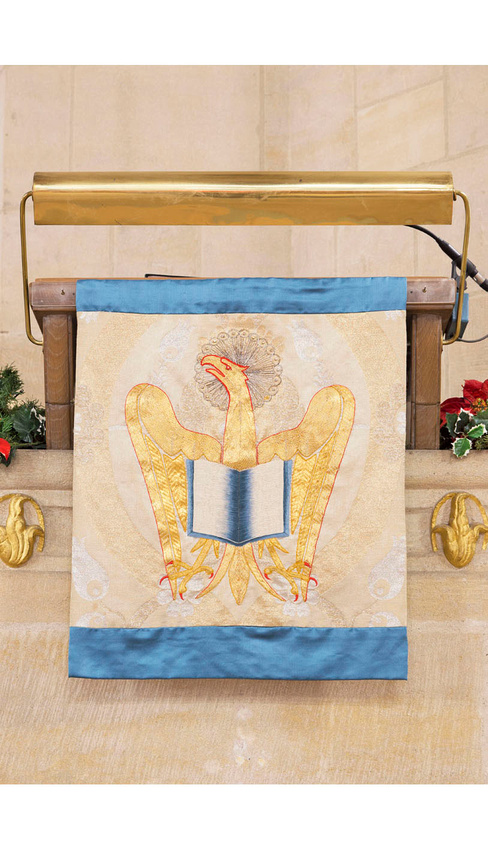